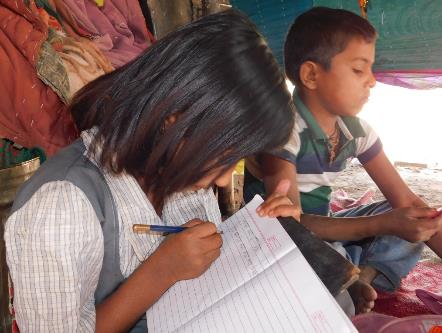 Problem: She belongs to the VJNT community. She is living in a Slum area of Chincholi road she lives in Kaccha house. Her mother and father are working collecting Ragpickers and roaming for the Begging of Grain. She has two brothers and one sister. Her elder brother and elder sister are drops out of school.

Because her mother and father are roaming for livelihood due to which no other person gives attention to their education and the same as her sister and brother they are not attended school. Lack of learning will same this is happening with the Bhagyashri too.

It is noticed that in VJNT communities most of the Children are drop out of school in their area ASVSS Vishal Raulkar is an identified problem.

Because of this problem try to communicate with Bhagyashree and various children in their community interacted discussion meetings conduct with them every Sunday tried to take their classes and try to teach them. Improved their learning interest.

Impact: Now she is attending school regularly ZP School No. 3 she is doing a study in the home too. She learns interestingly now she becomes positive. She becomes positive. Her interest is improved. On behalf of ASVSS Vishal is taking holiday extra class on Sunday.

Wider context: Bhagyashri is come into the main education stream at her right time due to which her small brother also comes into the learning process. Otherwise, in the future, she also drops out of school and do ragpickers work the same as her parents. So we get success to motivate her to do study and take education her parents also promote her to attend school and take education.

Case story: I am glad that our awarded land will initiate the women’s collective goat project.